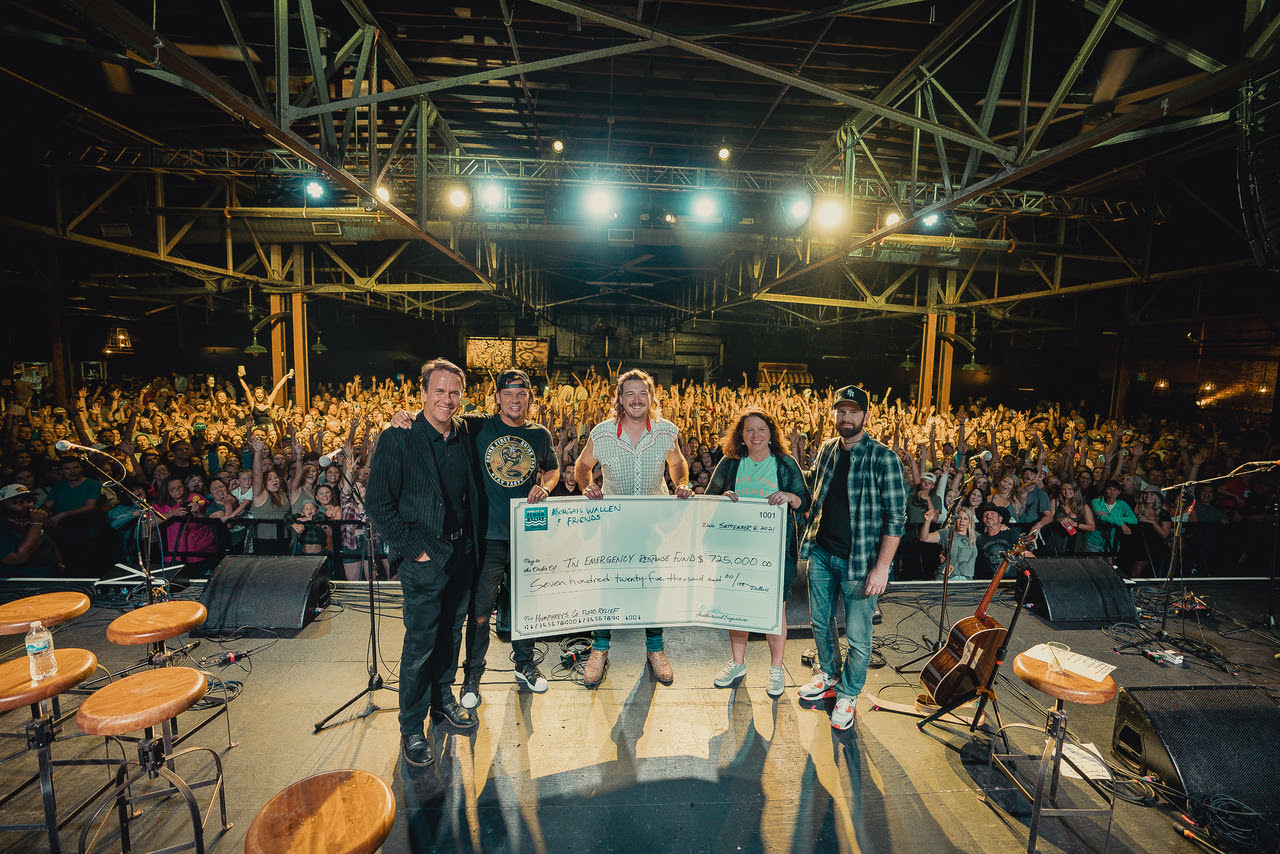 THIS JUST IN: WALLEN NOMINATED FOR 2021 CMA AWARDS FOR ALBUM OF THE YEAR WITH RECORD-BREAKING DANGEROUS: THE DOUBLE ALBUM

NASHVILLE, TENN. (September 9, 2021) – MULTI-PLATINUM Country artist and just announced 2021 CMA Awards Album of the Year nominee, Morgan Wallen, hit the stage for a good cause last night (9/8), hosting his SOLD-OUT MORGAN WALLEN AND FRIENDS acoustic benefit concert at Nashville’s Marathon Music Works raising over $725,000 for The Community Foundation of Middle Tennessee and the Tennessee Emergency Response Fund, to immediately assist victims of the recent severe storms and flooding in Humphreys County and other parts of Middle Tennessee.

The first round of all-star Country risers kicked off the night playing crowd favorites and breakout songs they have written and recorded. With a live auction in between rounds, Wallen then took the stage with Bentley, HARDY and Swindell while the audience roared and sang along to every word from each artist. Wallen played many of his soaring hits including “More Than My Hometown,” “Whiskey Glasses,” “Heartless,” “Chasin’ You,” and his brand-new single that was #1 most added at Country radio this week, “Sand In My Boots.” With a surprise guest BRELAND showing up and joining Bentley and HARDY as they sang their current single “Beers On Me,” the show was a once in a lifetime experience as they raised such an outstanding amount for Humphreys County.

Before Wallen closed out the night, he invited Amy Fair, Vice President of Donor Services from The Community Foundation of Middle Tennessee onto the stage. In this emotional moment, he presented a check to help support their relief efforts.

“This is the most money raised so far for our fund, and it’s going to make a big difference,” shared Fair with the capacity crowd. “And when we give the money to the organizations, we’re going to let them know how many of you care about them and that’s going to mean the most.”

Fair continued, “So I just want to tell you, we’ve already made grants out to 11 organizations and many of them as you can expect in a small community like Waverly have been the churches, who’ve come together and that have cared for people as well as some other local non-profits who are providing direct financial assistance. We gave money early, but we want everybody in Waverly and Humphreys County that we’re here for the long haul, just like you have been for our tornado relief, bombing relief. We’ve learned a lot, so besides the money we’re going to let them know what we’ve learned and be here for the long haul and be here for the people of Waverly. Thank y’all.”

“Well first of all, thank you guys so much for being here,” Wallen responded. “Most of you probably know that I’m a Tennessee boy. I was born and raised in Tennessee and I’m proud of it. The people here mean so much to me and I was watching the news and reading some articles and I read some stories that really touched my heart and made me feel like it could’ve been my hometown. I wanted to do something about it… Just seeing people hurtin’ man, nobody likes to see that and we’re going to try to do something about it tonight.”

To make a direct donation to The Community Foundation of Middle Tennessee and the Tennessee Emergency Response Fund, click here.
Just hours after the end of show, Wallen was announced as 2021 CMA Awards nominee for his record-breaking, critically acclaimed album Dangerous: The Double Album. “A sprawling coronation at the beginning of 2021” (Billboard), rave reviews for Dangerous quickly came pouring in nationwide, alongside high-profile features in GQ, The New Yorker, and The Tennessean.
← (icymi) MORGAN WALLEN ANNOUNCES BENEFIT CONCERT AT NASHVILLE’S MARATHON MUSIC WORKS (9/8)
(watch now) MORGAN WALLEN RELEASES STRIPPED-DOWN VERSION OF “865” FOR THE DANGEROUS SESSIONS →