First Country Review: “One Thing At A Time” “teems with shades of ’80s pop”

First Country is a compilation of the best new country songs, videos & albums that dropped this week.

Morgan Wallen, One Thing at a Time — Sampler 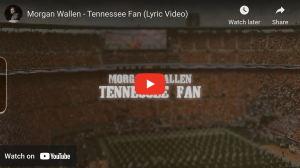 Morgan Wallen has released a three-song sampler as a teaser for the new music he’s been working on in the studio. One Thing at a Time — Sampler is made of the tracks “One Thing at a Time,” “Tennessee Fan,” and “Days That End in Why.” He’s at the top of the Billboard Country Airplay chart with “You Proof,” while another Wallen song, “I Thought You Should Know” is in the top 25 on the same chart. “One Thing at a Time” teems with shades of ’80s pop, as he declares he knows he should give up booze, pills, cigarettes and the memory of her, but he knows he’s only gonna “quit one thing at a time.” In “Tennessee Fan,” he revels in making a Tennessee fan out of an Alabama girl who was “raised Roll Tide.”