Back-to-Back Nights at 10 Stadium Shows Brings Tally to 26; Plus Arenas, Amphitheaters and Festivals

Tickets for Added Dates Will be Sold Through the Verified Fan Sale Beginning this Wednesday, Dec 7; For More Information, Visit MorganWallen.com

$3 of Every Ticket for U.S. Dates Benefits Morgan Wallen Foundation 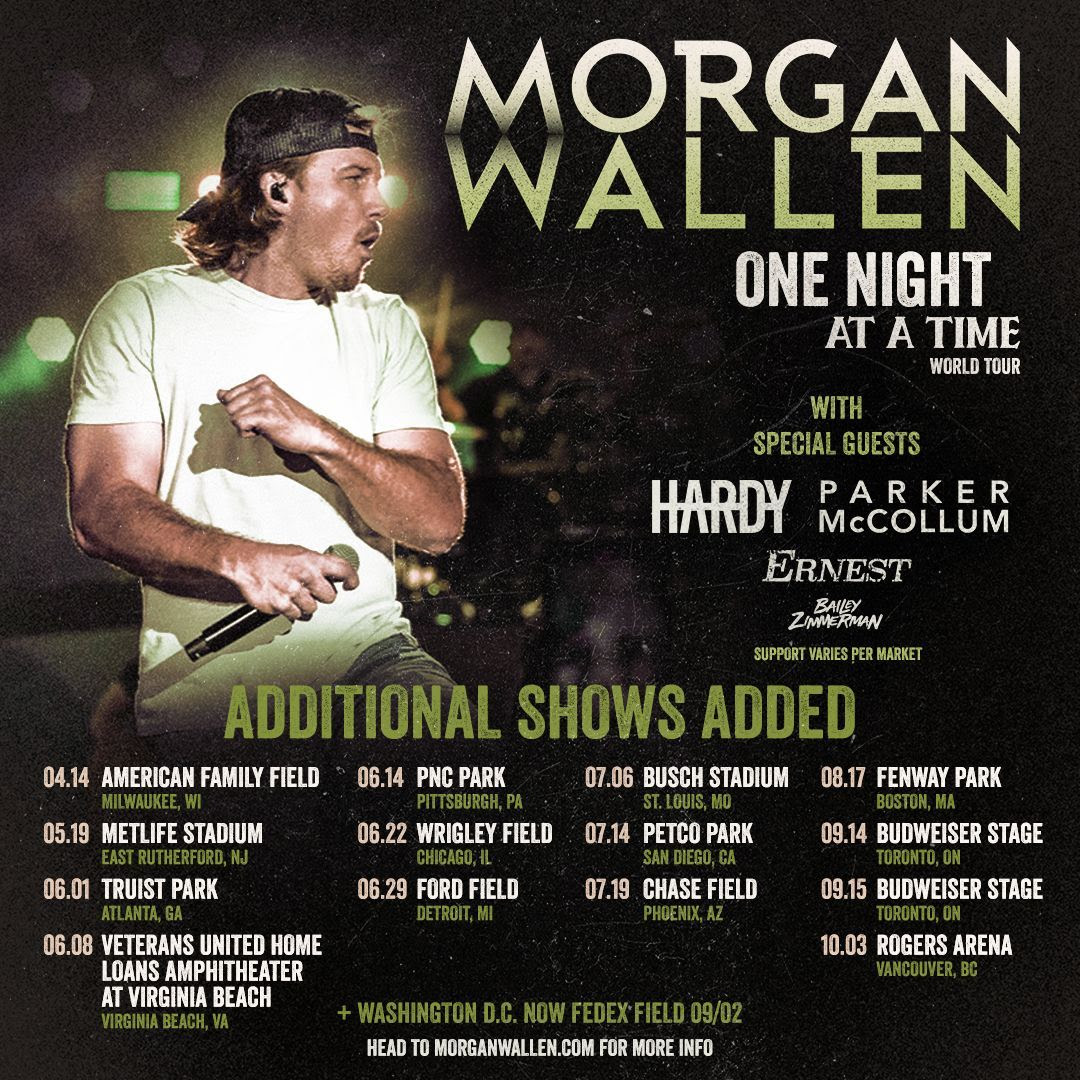 NASHVILLE, TENN. – Due to overwhelming demand, Morgan Wallen announced today the addition of 14 new shows across 13 cities, with back-to-back nights at 10 stadium shows, one of the largest tours of 2023. The man praised by Billboard for making “his superstar arrival as a touring artist” last year will bring his 58-show One Night At A Time World Tour to 26 stadium shows, plus arenas, amphitheaters and festivals to fans across four countries and two continents in his biggest tour yet.

Wallen’s One Night At A Time World Tour, produced by Live Nation in North America and Frontier Touring for Australia/New Zealand, kicks off overseas March 15-24 with shows in New Zealand and Australia with HARDY before returning stateside on April 14 at Milwaukee’s American Family Field with HARDY, hitting New Jersey’s MetLife Stadium, Chicago’s Wrigley Field and Boston’s Fenway Park with Parker McCollum, before wrapping on Oct. 7 at Tacoma Dome in Washington. ERNEST and Bailey Zimmerman will support across all dates, U.S. and internationally.

Wallen named his tour after one-of-three new songs on his recently released One Thing At A Time – Sampler: “One Thing At A Time”; which Billboard noted “teems with shades of ’80s pop” while Country Now applauded its unique sound, stating “[it] takes on a slightly different approach from the other two tracks as it features a bit more buoyancy in its raw melody.” The other two tracks on the sampler include “Tennessee Fan,” paying homage to Wallen’s East Tennessee upbringing; and “Days That End In Why.” All three songs serve as the first taste of what’s to come from his time in the studio and arrive on the heels of his new single at Country radio, “Thought You Should Know,” co-written with Miranda Lambert and Nicolle Galyon, currently sitting Top 20.

As on his Dangerous Tour, $3 of every ticket sold for U.S. dates benefits the Morgan Wallen Foundation which funds causes close to his heart and, to-date, has supported organizations such as Greater Good Music by donating over 500,000 meals-and-counting, to Children Are People, the Salvation Army and National Museum of African American Music.

All tickets for the added dates will be sold through the verified fan sale beginning Wednesday, Dec. 7. Times vary per market. Verified Fans will automatically be rolled into the added dates for the same city they initially requested as the originally announced dates sell out. Fans who registered should keep an eye out for an email Tuesday evening, Dec. 6 with more details. For more information, visit www.morganwallen.com. Morgan Wallen Fan Club pre-sale for Australia and New Zealand shows begins on Wednesday, Dec. 7.